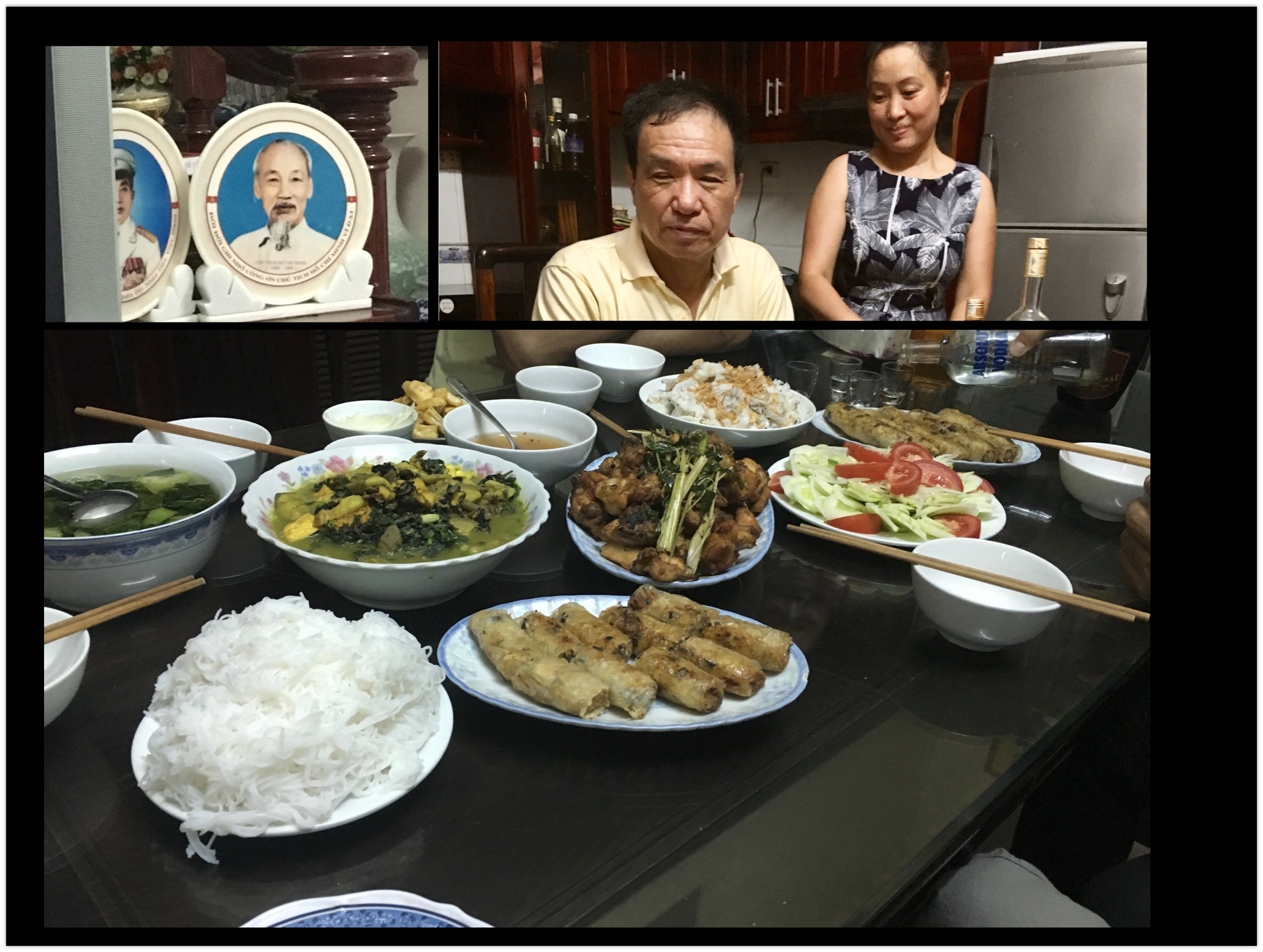 Of all the cool things I had the opportunity to see and do during my travels in Indochina in 2016, one of the most memorable was the dinner we had with a family in Hanoi.

It was all set up by the Vietnamese tour agency we'd booked with. Our guide accompanied us as a translator. We got to see inside a "tube house" and were treated to an incredible home-cooked meal and several different flavors of ruou— a traditional Vietnamese rice wine. (That is what is in the vodka bottles in the image.)

Now as for the snails, I'm not adverse to them at all but... we started with spring rolls—which were absolutely out of this world delicious—and of which I ate way too many. What happened is that as soon as I finished one spring roll the hostess would immediately place another one on my plate. It took me awhile to catch-on (and by "awhile" I mean precisely 4 spring rolls) that the key was to stopping this uninterrupted flow of spring rolls was to not completely finish one and just leave a piece on my plate. It was the clear plate that was the signal for the next spring roll. I blame the rice wine for my slowness in coming to this realization.

Now bear in mind that I'm not an especially big eater and on top of that when traveling, especially toward the beginning of the trip (and this dinner was the evening of day 1), I can be a bit "off" as far as my stomach goes. So there I was, 4.5 spring rolls and God only knows how many shots or rice wine into the meal when it was time for the soup— Bun oc, noodle soup with snails—I think it can be made with other things but snails are the favorite—the guide said it's "comfort food" for the people of Hanoi.

Like I said, I'm not snail averse; although, it's also fair to say that I don't go out of my way to eat snails nor would I consider them anything close to a favorite. Related, when I have had snails it's been more of an escargot thing where maybe I eat 4 or 5 as part of a shared appetizer. In this snail soup, though, there were like a 4 or 5 snails per spoonful. And since my hosts eyes were upon me--and did I mention we were the first guests from the United States to share one of these meals with them? So, yeah, whatever this family felt about Americans up to this point, it would forever be altered—for good or bad—by my forthcoming actions. I knew, too, that one bowl wouldn't be enough, since I'd already set the bar so high with my spring roll faux pas.

Let it be known that I managed to do one bowl and half a second. It wasn't easy, especially because there was more food after the soup (but no more snails). I do believe the hosts were slightly disappointed—I couldn't manage seconds on any dish beyond the soup—but I also believe I was able to offset that with my heroic consumption of the rice wine.

And it is because of the moments like the above that I love to travel.