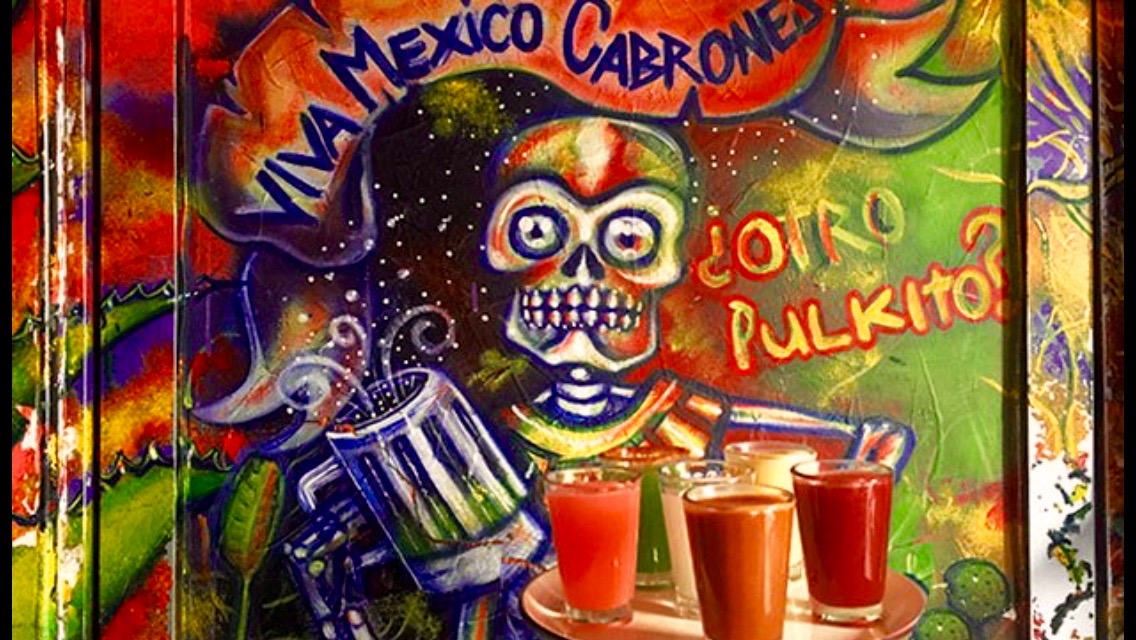 In the pulque bar mural
Catrina winks "¿otro coquito, guapo?"
Her breath on my neck chills

Ok, let me start by saying both of the haikus above are absolute failures because they both rely on the reader/viewer having seen the pulque bar mural that is the subject of both. Definitely some other poetry from is called for it, yet I still think there is something to be gained from going through the haiku exercise.

The first one, the one in Spanish, is really just goofing around with the language. Translated it looks like this:

Another pulque?
Catrina asks me
but she already knows.

I linked the background of story of Catrina as it's integral to the understanding. "La Catrina has become the referential image of Death in Mexico." In the mural, I imagine that Catrina is the waitress/barmaid asking if I want another, but, being that she is Death, she already has me figured out. It is believed, too, that pulque was a ritual beverage for the Aztecs and that it was part of the sacrificial rite, so that plays into this notion of being offered another pulque by Death itself.

In the second haiku, I revert to the comfort of my mother tongue but continue with the theme of interacting with Catrina/Death but this time there is also the sense that Catrina is flirting, e.g., winking and calling me guapo (handsome) and getting so close that I can feel her breath on my neck, and that I find the flirtation titillating, e.g., one way to read the the last line is that my neck is getting chill bumps in arousal.

In the pulque bar mural
Catrina winks "¿otro coquito, guapo?"
Her breath on my neck chills

I'm flirting with death here. Of course, you can (and should!) read the last line literally in that her breath is cold because, after all, she's Death. But that is precisely why one flirts with death, no? It's riding that razor edge of being so close to death that you're finally, fully alive.

Closely related is that sweet pleasure at the possibility of a passionate sexual encounter, especially an encounter with one you're already pretty sure is a bad girl, femme fatale, type (or bad boy, alpha from the woman's p.o.v.). And there is no badder girl than Catrina/Death. This all gets tied back into the scene of the pulque bar and drinking pulque because there is also that very, very thin line between being perfectly drunk and slipping over to being too drunk. Not too mention the fact that getting titillated by a skeleton is perhaps a sign of wearing the "beer goggles" after a few drinks too many. So "¿toro pulkito/coquito?" is really a loaded question, right? I'm pretty sure that's why the muralist added it.

Alright, so just a bit more. One of the things I especially like in this exercise of the failed haiku is the word "coquito." At the most literal it's the Spanish diminutive of "coco" which is coconut and one of the standard pulche flavors. I initially wanted to substitute a flavor instead of the the "pulkito" from the mural in an attempt to bring in a kigo, a haiku season word.1 Originally I had guava/guavito, as that is my actual favorite pulque flavor, but then I realized how much better "coquito" works because it suggests coqueta, the Spanish word for a flirt (coquette). And, and, and, "coco" has a secondary meaning in Spanish as "ghost" or "bogeyman." This adds some layers to the already loaded question "¿otro coquito?"

1 Neither guava nor coconut are "official" kigo words, but for haiku set in Mexico, they seem totally appropriate stand ins.