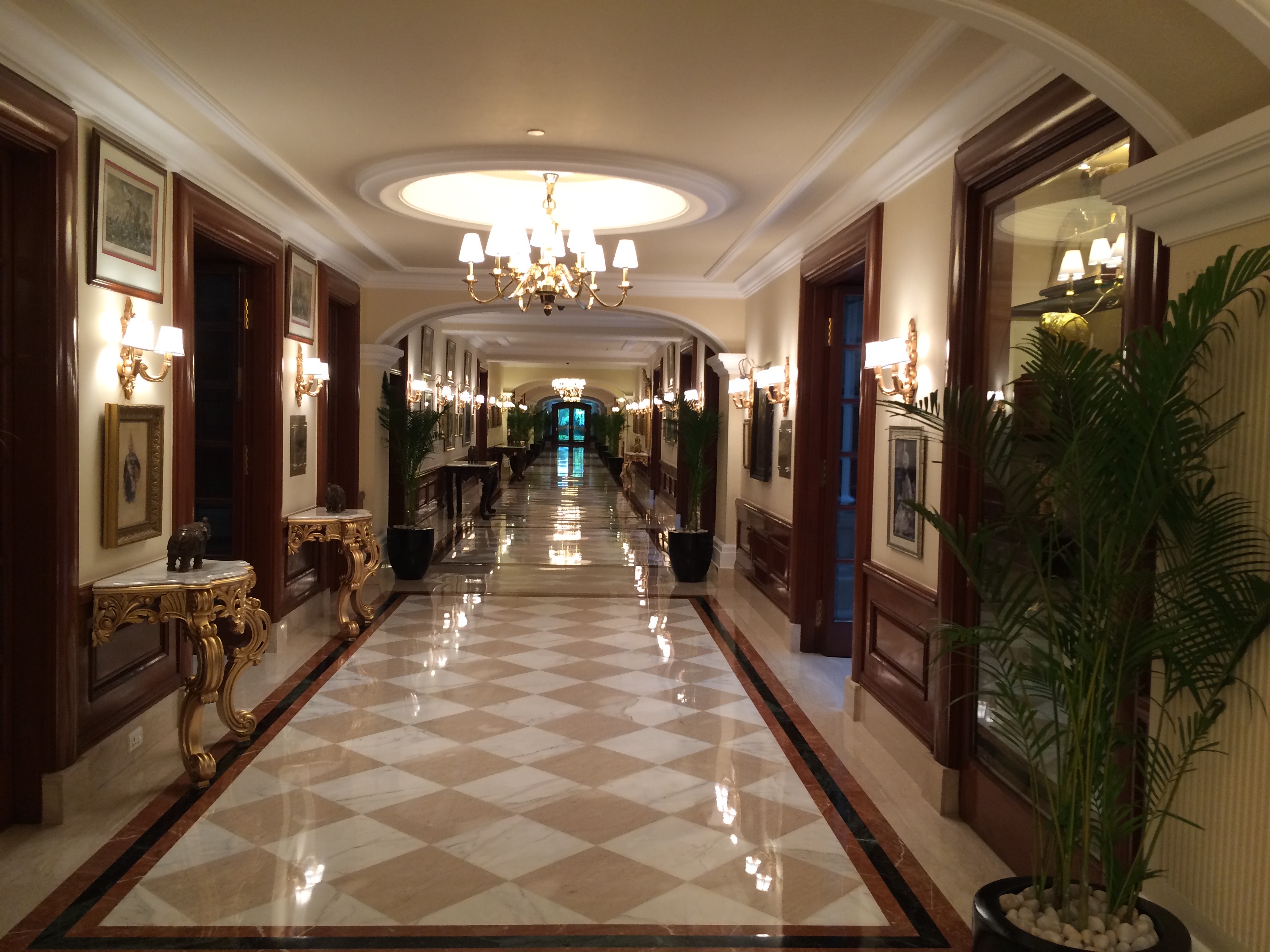 Image: A hallway leading to the reception area of the Imperial Hotel where the scene below takes place.

From Chapter 4 an excerpt of the in progress novel The Kali Algorithm an adventure romance.

The following excerpt from the novel occurs the morning after the previous one–it's the second day in New Delhi.

Sana—the heroine—is about to meet her driver and guide again for a second part of sightseeing tour that had begun the previous afternoon. However, Sana's traveling companion and best friend, Lazo, never returned to the hotel from clubbing the night before. Meanwhile, Sana's lover, John, who is supposed to join her in India at some point soon, has also been out of contact. The two lovers haven't had any communication since having a quarrel after a surprise meeting during Sana's layover in Doha en route to Delhi.

Both of these events, the disseapearance of Lazo and the lack of contact with John, play a pivotal role in the the future unwinding of the plot.

The scene opens with Sana tired and on edge over both John and Lazo.

The driver Radul was waiting in reception, pre-punctual as always, and looking pressed and well-rested—the opposite of how I looked and felt dragging myself into the lobby.

“The guide is to be arriving shortly,” said Radul, a hint of displeasure in his voice. If I were to guess, I’d say Radul considered ‘on time’ to be flirting precariously close to being late. “Please be sitting,” Radul politely instructed me.

I grabbed a spot on one of the lobby couches and leaned my head back. I was so tired. I closed my eyes and almost immediately went into the cloudy space somewhere between sleeping and wakefulness—the din of coming and goings of the reception area was a perfect white noise lullaby, like one of those environmental field recordings people use to fall asleep—people like myself, for instance.

To sleep, to let go and cross over completely to sleep was so tempting—irresistible, really. The great mystery and torment of insomnia, of course, was not being able to sleep when you want to sleep contrasted with not being able to stay awake when you needed to. I knew that each second the guide was delayed the more likely I'd nod off. However the fear of falling asleep and drooling or snoring—perhaps both—in public was just enough to keep me hanging onto my half-awake state—for now.

I imagined Lazo was sound asleep somewhere. After losing him last night, I assumed he’d gone home with Jaya—I’d always been equal parts captivated and repulsed by Lazo’s casual promiscuity—but at that moment, I was more jealous than anything else. Jealous that he wasn’t spending time with me and had left me alone. That was the whole point of my inviting him along. Lazo was supposed to be keeping me company while I waited for John to arrive and join me in India. Yet here I was about to sleepwalk through a daylong tour of Delhi while Lazo was off somewhere holed up in debauchery with a guy he barely knew and would undoubtedly forget and never see again. Must be nice. I barely knew John and wondered if he was with someone else that morning or night or afternoon in whatever timezone he was in. And there was the rub—what was really bugging me. I was anxious, jealous, and thoroughly unrequited with all things John. If I hadn’t been so hopelessly tired, jet-lagged, and ecstasy-hungover, I’d surely be better at dealing with my self-pity. And how was it that despite my exhaustion I still had enough energy to keep a jealous lover's greatest imagined scenes from a betrayal (in flagrante delicto!) video montage playing endlessly in my head?

It’s true that Lazo would be bitching incessantly about being up so early if he were here, so there’s that. But I did enjoy his bitchiness. His knack for the amusingly theatrical always overshadowed my own petty complaints. Also Lazo would be helpful in soothing my anxiety over John. And by soothing I mean he'd be ribbing me mercilessly and conjuring up his own exaggerated jealousy scenarios which would have the effect of making me realize how silly my own were. Really, if I’d only heard something—anything—from John—I’d be OK but nothing—not one thing since saying goodbye in Doha—30 hours give or take—not that I was counting—hah hah hah. I know he said he’d be remote with spotty service but really—if you wanted to contact someone you’d find a way. And the same goes for Lazo—couldn’t Laz just let know me he’s fine, a simple text?

Breathe in… In the here, in the here… Breathe out… In the now, in the—

“Begging you pardon, mum.” My eyes opened to Radul towering over me. "Guide is coming now," he said. Radul flashed the barest of grins. “The esteemed Doctor Luv arriving there."

And so he was. Luv—I really had a hard time calling him Dr. Luv—came bounding into reception.

I stood to return the greeting and did my best to put on a cheerful face.

“Good morning, good morning,” Luv said, his eyes darting quickly from me to Radul and back. “So terribly sorry for the delay, Delhi traffic, you know?” He made a quick apologetic head bobble. I suspected Luv was the sort who was always running 'just a few minutes late.' Radul’s expression suggested he felt the same.

“And how are you feeling this morning?” Luv asked me. “How was your sleep?”

“Superb,” I said. It was the most effortless response when your sleep had been horrible—one word, no additional explanation or follow up required, especially given—as I’d discovered yesterday— Luv’s tendency toward the garrulous.

“That is most excellent to hear!” Luv gave me an enthusiastic two thumbs up. “And I would like to put forward saying that you are looking quite freshened-up. Wouldn’t you agree, Radul?”

Radul blinked his eyes once slowly and gave a single nod. Was he agreeing or choosing—as I just had—the path of least resistance? I wasn’t very freshened-up over yesterday—if anything I was freshened-down—my eyes were baggy and I wasn’t wearing any makeup on account of the expected heat.

Luv met my eyes and seemed to be considering what to say next. He took a step toward me and whispered into my ear, “Rest assured, mum, in Old Delhi which is our first stop on today’s tour, there is one of the oldest and most excellent Ayurvedic healers where we are finding the medicine for you.”

“Yes, Miss Dr. Sana.” Luv leaned in close again with another covert bit of information, “For your pox.” He gestured surreptitiously with two fingers across his face over the bridge of his nose.

I was thrown off and thought maybe this was one of his tour guide jokes gone awry, but his expression was one of much earnestness. I grabbed my phone and gave myself a look in reverse-photo mode. There was no rash, no pox… just the baggy eyes, no makeup up, and…

“Freckles,” I whispered back to Luv. “I get them sometimes if I’m in the sun too long.” Like yesterday, I realized, when we’d been standing around the Ashokan Edicts in the sun outside the museum listening to Luv explain their historical significance.

“Yes,” he continued to whisper, looking a little exasperated at having to explain things to me. He pointed skyward. “The Indian sun… very bad for British ladies.”

“Oh, yes, I see,” I said to Luv’s head bobbing with pleased affirmation that I finally understood. I’d given up reminding the guide that I was American, besides the freckles were something I’d inherited from my dad’s British side, so Luv was technically correct. My mom thought my freckle outbreaks were ‘adorable’, but I was never much of a fan.

“Very well, then, Dr. Luv,” I whispered back conspiratorially. “I’ll give it a go.” And with that we were off to Old Delhi with a very exuberant Dr. Luv leading the way.